The Champions Cup heads into its final round tomorrow, and thanks to a convoluted format, there’s still plenty to play for. Round three threw up many talking points; amongst some scintillating play, there were five red cards across the weekend, with referees falling under the microscope. Several clubs will be seeking to seal home ties for the last sixteen, while others will be scrapping to qualify. With the Six Nations just a couple of weeks away, plenty of players will be hoping to catch the eye and avoid injury simultaneously.

Friday’s action kicks off with Leicester hosting the Ospreys. After their superb victory in Clermont last week, the Tigers are assured of qualification and will seek to seal a home tie. Ospreys are almost certainly through after beating Montpellier in a pulsating encounter, gaining a bonus point in the process. A win for the Welsh side could see them sneak into the top four, so there’s everything to play for at Welford Road. Friday’s other encounter sees Lyon hosting the Bulls; the French side needs a near miracle to qualify, while the South African side has a slim chance of gaining home qualification after their impressive win over Exeter last week.

Quins know a win against the already-through Sharks would guarantee qualification. The Londoners lost a topsy-turvy game away at Racing last week, which finished with the Parisians only having only twelve players left on the field. Marcus Smith made an eye-catching return, and with Owen Farrell currently sidelined, Saturday represents a chance to steal some ground on his rival. Elsewhere, Gloucester could sneak into a qualification place if they win in Bordeaux and Racing lose to Leinster. Racing head to Dublin needing a victory, a mountainous task considering Leinster’s form, the Irish side obliterated Gloucester last week, further underlying their credentials as tournament favourites.

Exeter go into the final round knowing a win would give them a home tie. They host a Castres side rooted to the bottom of the pool, so the omens are good. It’s been a difficult week for the Chiefs, with the departure of Dave Ewers announced this week and rumours that fly-half Joe Simmonds is off to Pau, the latest in an alarming exodus that poses yet more questions about the Premiership’s financial viability. Henry Slade’s red card he received last week against the Bulls has been rescinded, providing the Chiefs with some much-needed good news. Pool A’s final game takes place on Sunday evening, with Saracens hosting Edinburgh. The Scottish side secured their qualification with an impressive win at Castres last week. A victory on the road could see them edge into the top four depending on other results while additionally serving as an aperitif ahead of the Calcutta Cup.

In Pool B, Northampton host La Rochelle with just pride to play for, despite a valiant comeback effort at Thomond Park last week. La Rochelle are sitting pretty in second after their last-gasp victory over Ulster, sub prop Joel Sclavi’s try breaking the Ulstermen’s hearts. The Stormers host a Clermont side who are currently clinging on to the final qualification place, knowing they will need to better the results of the sides below them. The Stormers are already through after easing past a 13-man London Irish in Brentford, and they’ll be looking to nail down home qualification.

One side who could sneak past Clermont is Sale, who travel to Belfast on Saturday night to face Ulster. Ulster produced a gutsy, spirited display in horrible conditions last weekend, and one that might reignite their stuttering season. Meanwhile, Sale suffered a bruising defeat at home to Toulouse, having to play with 14 men for around sixty minutes after Cobus Weise’s red card. Sale destroyed Ulster in the home fixture but will face a much sterner task at Ravenhill. Montpellier are another side looking over their shoulder, welcoming a London Irish side who are already out. The French champions have endured an indifferent campaign but know a victory would assure their qualification.

Arguably game of the round is Munster’s visit to Toulouse. After their professional performance in Salford last week, the French side tops the pool, while Munster are virtually through and could sneak into the top four with a win. Munster held off a Northampton comeback last week after Jack O’Donoghue’s red card left them playing with 14 men for an hour. The Irish side were indebted to a fast start, where they blew Northampton away, playing with the muscular intensity of Munster of old. Munster’s number eight Gavin Coombes produced an inspired performance for the home side, with 23 tackles alongside his 16 carries, 3 turnovers, and 2 tries.

The controversial format has undoubtedly removed the number of dead rubber matches, with plenty still up for grabs as we head into the final round. 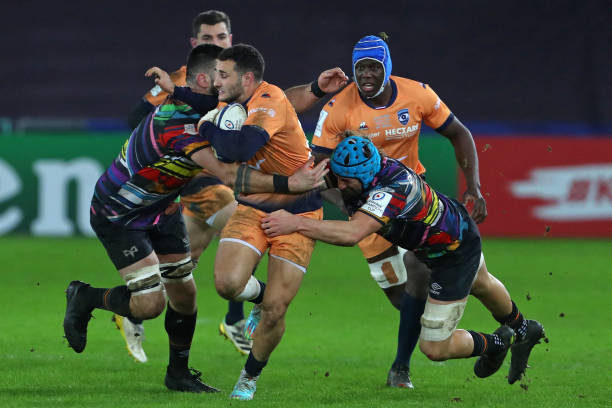