The European Champions Cup returns this weekend, entering the pivotal round three, representing a last-chance saloon for some sides while others could seal their qualification for the last sixteen. However, you can’t help but feel the tournament lacks the back-to-back drama provided by rounds three and four in its previous format; played just a week apart, they provided the opportunity for instant revenge. Regardless of structural issues, there are enough intriguing clashes this weekend to whet your appetite.

Friday’s only fixture sees Leicester face a tough trip to Clermont. The Stade Marcel-Michelin isn’t quite the intimidating fortress it was when Clermont were Europe’s perpetual bridesmaids, but the Tigers arrive on the back of successive heavy defeats, leaking over forty points in their last two matches. The Tigers are well set in their pool after winning their first two fixtures, and a win in Europe could be the shot in the arm they need to re-energise their season.

Leinster laid down an impressive marker before Christmas, dismantling Racing Metro in Paris before thumping Gloucester at home a week later. George Skivington courted some minor controversy for his team selection in Dublin, effectively sending out a B-team. Expect Gloucester to be a different proposition at Kingsholm, but in Leinster, they meet an irresistible juggernaut. The Dublin-based province have yet to lose a game all season and will be confident of preserving that record.

Elsewhere in Pool A on Saturday, the Sharks host Bordeaux Bégles in a potentially exciting, free-flowing contest. The Sharks currently sit ninth in the United Rugby Championship, having played a few games less, but they are generally formidable at home. The Sharks edged the reverse fixture in round two and know a win on Saturday would see them seal qualification. Bordeaux need a win to keep their hopes alive and will be buoyed by their impressive success at La Rochelle before Christmas in the Top 14. Exeter face a tricky trip to the Bulls in Pretoria but will arrive with confidence after their dominant win over Northampton last Saturday. The Chiefs gave the Bulls a pasting at Sandy Park in December, and I quietly fancy them to pip the Bulls on Saturday, albeit they are without Luke Cowan-Dickie, the hat trick hero of that win. I would expect Saracens to have too much class for Lyon at home, even with Owen Farrell’s absence.

Pool B sees the clash of the round on Saturday lunchtime, with Sale Sharks hosting five-time European champions and Top 14 table-toppers Toulouse. Sale were well beaten at the Stade Ernest-Wallon, but their form in the Premiership has been excellent, their defence especially miserly. They will be without the injured Tom Curry, but his brother Ben has been in excellent form and will relish a potential head-to-head with Jack Willis. Toulouse currently look like one of the few sides that could challenge Leinster, boasting an enviable array of talent in their back line. The match could hinge on how well Sale can stop Toulouse’s influential half-back duo of Antoine Dupont and Romain Ntamack. At home, I think Sale will nick it.

Elsewhere in Pool B, Munster host Northampton Saints. Both sides have displayed inconsistent form in their respective leagues, although Munster enjoyed a productive Christmas period, including a last-gasp win over Ulster. The Saints desperately need a win to keep their slim European hopes alive after losing the reverse fixture, Munster being one the few sides to keep the free-flowing Saints try less. La Rochelle will expect to beat Ulster at home after surviving their impressive comeback effort at an empty Aviva in December. Ulster’s form has been indifferent since their loss against Leinster in November, and I can’t see their fortunes changing at the fortress that is the Stade Marcel-Deflandre. Ospreys will embrace the visit of Montpellier after their shock win over the French champions in round two, their first win on French soil since 2008. The Welsh sides league form has been wretched, but a win on Saturday night would put them in the qualification mix and provide a much-needed boost for Welsh rugby.

On Sunday, Edinburgh travel to Castres, hoping to repeat their impressive win in the reverse fixture. Castres are languishing in twelfth in the Top 14 and Edinburgh will be hoping they show some of their famed European indifference; a win would give the Scottish side a good chance of qualification. An injury-ravaged Quins face a difficult trip to Paris, facing a Racing side who will likely need a bonus point victory to keep any qualification hopes alive. Quins will miss the breakdown mastery of Will Evans and Jack Kenningham, as quick ball and Finn Russell can be a lethal combination. Sunday’s only Pool B fixture sees London Irish host the Stormers; nothing less than a win will do for Irish against the impressive South Africans, who sit second in the URC.

The weekend’s fixtures represent the last opportunity for players to make an impression ahead of the Six Nations squads being announced next week. International coaches will be watching with a mixture of keenness and trepidation, hoping to see some strong performances while being wary of any of their players picking up injuries. It’s a make-or-break weekend in Europe. 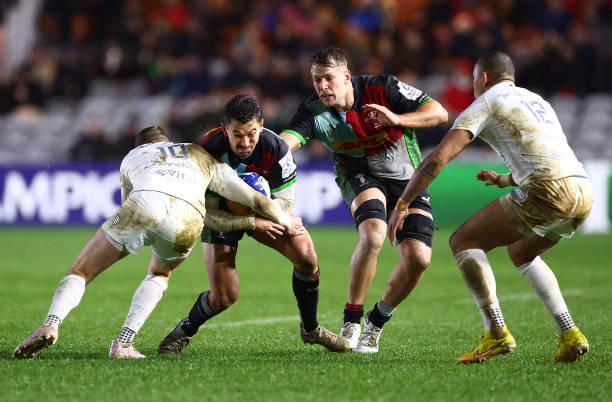