Steve Borthwick has announced his much anticipated first squad as England’s head coach, which features some notable ommissions. Billy Vunipola, Jack Nowell, and Jonny May all miss out on making Borthwick’s 36-man squad; the trio have 180 caps between them and will hope the international door has yet to be fully closed on them ahead of the World Cup. However, there is a return for the experienced Dan Cole, the 95-cap prop returning to the England fold for the first time since the 2019 World Cup. Borthwick also confirmed Owen Farrell would serve as captain and that he will be available for England’s opener against Scotland, despite the controversy surrounding the nature of his ban.

As mentioned above, Dan Cole’s return is the standout story in the front row. Cole joins Kyle Sinckler and Leicester teammate Joe Heyes as the tight-head options, Borthwick opting for Cole’s scrummaging nous ahead of Newcastle’s Trevor Davison. Val Rapava-Ruskin is unlucky to miss out at loosehead; the Gloucester man has been in excellent form, with an impressive 13 turnovers in the Gallagher Premiership to go alongside his scrummaging prowess. Borthwick has opted for Bevan Rodd behind Ellis Genge and Mako Vunipola, perhaps preferring Rodd’s dynamism in the loose. Injuries at hooker have left Borthwick short, with Jamie George the only capped hooker in the squad. Try machine George McGuigan gets a deserved call-up and will likely compete with Harlequins chop-tackling king Jack Walker for a spot on the bench.

There is a welcome return at lock for Courtney Lawes, who will serve as vice-captain alongside Ellis Genge. England badly missed Lawes’s physicality in the autumn; the big question is whether Borthwick will utilise him in the engine room or on the flanks. Ollie Chessum is a surprise inclusion but someone who Borthwick will know well. A big unit who can also play blindside, he edges out his teammate George Martin. Jonny Hill and Maro Itoje are in as expected, while Nick Isiekwe returns after missing the autumn internationals through injury. Dave Ribbans is unfortunate to miss out after an eye-catching autumn, while his club partner and the Premiership’s top tackler Alex Moon might also have been hopeful of inclusion. Neither Alex Coles nor Hugh Tizard, who were part of the autumn squad, are included.

The big talking point in the back row is the omission of Billy Vunipola. Vunipola’s recent form has been excellent, and after fighting his way back into inclusion in the autumn, his absence is somewhat surprising. With rumours swirling around his future, we may have seen the last of Billy in an England shirt. Ben Earl makes a belated return, a reward for his consistently excellent form across the previous year. Ben Curry benefits from his brother’s injury to get a deserved call-up and will likely compete with Earl for the seven shirt. Alex Dombrandt is back after missing the autumn through injury, while thankfully, common sense has prevailed, and Jack Willis is included, despite playing across the channel. Lewis Ludlam beats out Ted Hill and Tom Pearson, with Borthwick perhaps preferring his ability at the line out. The back row has been a fiendishly competitive area of selection, and hopefully, we won’t see locks packing down on the blindside anymore!

There are no surprises at scrum half where Northampton’s Alex Mitchell deservedly gets the nod behind England’s most capped player, Ben Youngs, and Jack van Poortvliet. The question is whether he can unseat either of the Leicester duo, who will likely battle it out for the nine jersey. Fin Smith is the squad’s real bolter; the talented young fly-half has impressed since moving to Northampton in the summer. Smith, an England under-20 international, qualifies for Scotland through his grandfather, and his inclusion may be designed to dissuade any thoughts of shifting his allegiance. Owen Farrell’s selection as captaincy suggests he will get the nod at ten ahead of Marcus Smith, who made a sparkling comeback from injury yesterday against Racing Metro. Borthwick may continue with the ten-twelve axis, but Farrell or Smith is destined to be the debate that dominates the coming weeks.

Leicester’s Dan Kelly gets in at the expense of his injured teammate Guy Porter. Kelly has long been championed by Borthwick and is favoured by Kevin Sinfield for his defensive work. His inclusion suggests a possible shift in tactics, and it will be interesting to see whether England opts for him or the raw power of Manu Tuilagi at inside centre. Ollie Lawrence is extremely unlucky to miss out, arguably the Premiership’s form centre; his exclusion further suggests England wants to move away from a power-based midfield. French-bound Joe Marchant receives a recall and will compete with Henry Slade for the thirteen shirt, though Slade’s controversial red card at the weekend could throw a spanner in the works.

Jack Nowell and Jonny May are notable omissions in the back three, but there is a return for the in-form Elliot Daly, who scored a hat trick in Saracens’ comfortable victory over Lyon on Saturday. Daly provides some experience, with Borthwick opting for the youthful talent of Tommy Freeman and Ollie Hassell-Collins. Freddie Steward has the fifteen jersey bolted down, while surely Cadan Murley deserves a shot on the wing? Max Malins also receives a recall, but there is no space for Anthony Watson.

Borthwick has picked an exciting squad, and most importantly, he has picked on form. There are some big-name absences, showing that England’s new head coach isn’t afraid to make tough decisions. The quiet optimism around Twickenham continues to build. 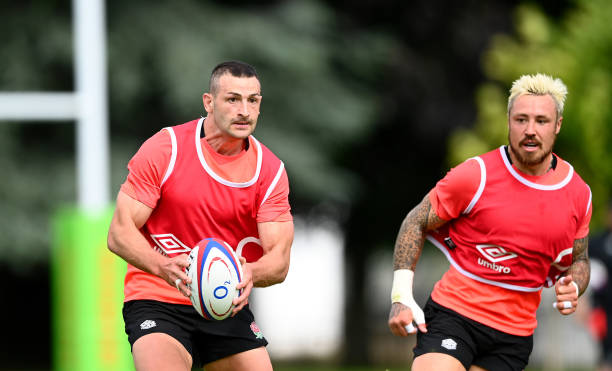